On Monday it was the Carlton School Olympics Closing Ceremony, that's when they hand out the medals to the people that got a gold, and for the people with second and third place you got a ribbon and a certificate. I got a gold in sprints because I am super fast and in vortex, I picked up a second place, it was just too hard to beat Cole because he has a strong arm. The gold medals were  made out of  wood and they were spray painted gold, on the front they said Carlton School Olympic Champion.
There was a special guest that came to hand out the gold medals, she was an Olympic athlete. Her name was Phillipa Baker-Hogan. She placed fourth in the wom'n;s double skulls rowing final just one place away from a bronze. That was in 1992. She also went to the Olympics in 1996 and got 6th in the womans double sculls final.
Over all I think every body did their best and I felt proud because I got a gold and silver medal.
All Room 15 did pretty well. Check out the winners.
By Keylen 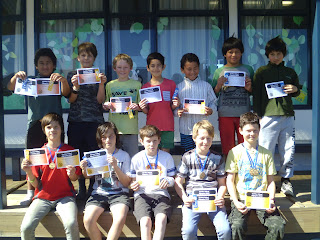 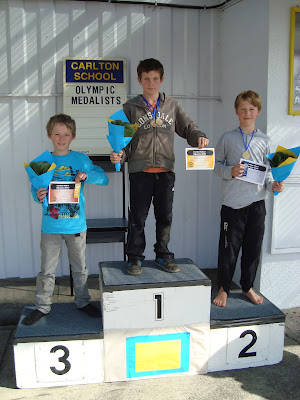